The Positive Impact of Automation Technology on Future of Jobs

When we speak of automation technology, we all have one fear.

Will automation result in loss of jobs? Or will companies automate mundane jobs using automation technology and create jobs for all in the process?

It is clear that there exists a prominent confusion between the interaction of technologies like Artificial Intelligence (AI), robotics and jobs.

Many (or most) assume that automation technology will affect their jobs and that is true.

However, what determines the vulnerability is not the work you do (white collar or blue collar) but whether your job is repetitive or routine. At this point, it is also important to understand that robots cannot substitute you completely. They can only take over certain task from your jobs.

Let’s look at three compelling arguments which will showcase that automation technology will have a positive impact on the future of jobs.

The argument that technology takes away jobs can be traced back to the Industrial Revolution.

Weavers were at the forefront of this objection. They argued that cotton mills, machinery and steam engines will take away their livelihood. More and more tasks were getting automated which forced the weaver community to focus on other tasks (which couldn’t be automated). For example, running the machine or maintaining it.

According to Economist, in an article on Automation Technology and Anxiety, “In America during the 19th century the amount of coarse cloth a single weaver could produce in an hour increased by a factor of 50, and the amount of labor required per yard of cloth fell by 98%. This made cloth cheaper and increased demand for it, which in turn created more jobs for weavers: their numbers quadrupled between 1830 and 1900. In other words, technology gradually changed the nature of the weaver’s job, and the skills required to do it, rather than replacing it altogether.”

A study of census data in England and Wales since 1871 found technology created far more jobs than it affected during that 140-year period.

“Machines will take on more repetitive and laborious tasks, but seem no closer to eliminating the need for human labor than at any time in the last 150 years,” says the report, authored by Deloitte.

According to Sarah, Amazon offers a modern example of this scenario. While the company has increased usage of robots by more than 100%, the rate at which they hire labor force has not declined. 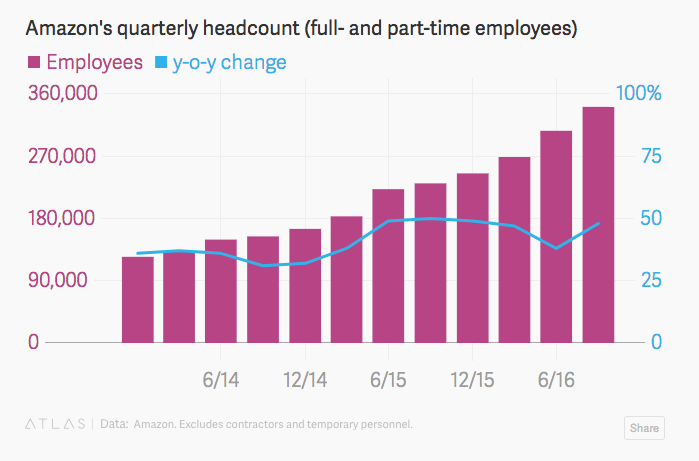 Bottom line being, while robots can help out in the warehouse, a company still needs manpower (may be lesser man hours) for his warehouse.

Agriculture in the U.S economy is another good example. Before the advent of the industrial revolution, 60% of their population was dependant on agriculture. This dropped to less than 5% by 1970s.

Did they face massive unemployment? No.

The displaced labor force took to other jobs like computers, flying airplanes, driving cargo across the country etc - occupations that weren’t feasible in 1900. 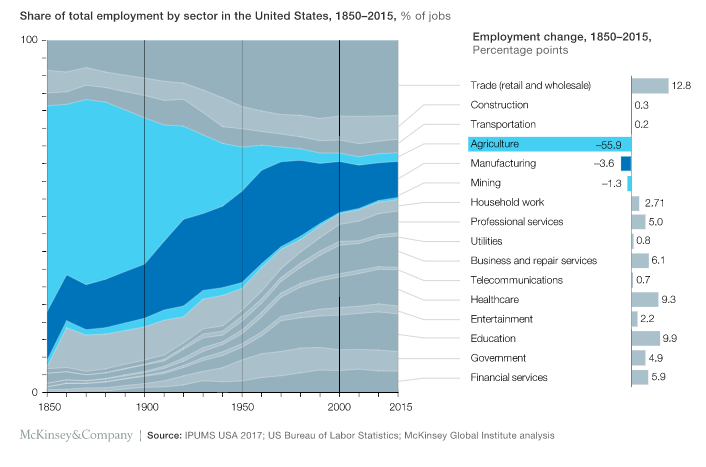 Share of total employment by sector in the United States

Similarly, with technology and social media, outbound marketing (print ads, banners, cold calling etc) became obsolete. However, the job of marketing managers remained. The nature of job shifted to social media and other channels. According to Hubspot, companies are now shifting focus to Inbound strategies leading to increase in jobs.

The Bureau of Labor Statistics (BLS) projects that employment for marketing managers will grow by 13% between 2012 and 2022.

Which gets us to our next argument

Argument 2 - While automation technology may affect job prospects in few fields, it will open other doors

Let’s take the example of an ATM. People feared that ATMs will reduce the job of tellers. Look at the headlines which make it to top 10 of a Google Search for “Does ATM steal tellers job”

Did it happen? Not really!

In an EconTalk podcast, Bessen shares with us

Well, the average bank branch in an urban area required about 21 tellers. That was cut because of the ATM machine to about 13 tellers. But that meant it was cheaper to operate a branch. And when it became cheaper to do so, demand for branch offices increased. And as a result, demand for bank tellers increased”

Legal discovery is another great example of this.

When technology gave us a legal software to do discovery, people thought it would affect the jobs of clerks and paralegals in the industry. However, that did not happen. Not only did it reduce the cost of discovery through automation, the number of legal clerks in America increased by 1.1% a year between 2000 and 2013.

Forrester analyst J.P. Gownder says, “While these technologies are both real and important, and some jobs will disappear because of them, the future of jobs overall isn’t nearly as gloomy as many prognosticators believe. In reality, automation will spur the growth of many new jobs, including some entirely new job categories.”

Yes, with new technologies, new jobs will come along. Did we think that “SEO” or “social media manager” will be a job?

Using data tracked by Rand and LinkedIn, we found that the use of particular marketing keywords has increased within user profiles.

It is difficult to say what new jobs will come from automation technology, but we see a growing need for people who can to teach, train, build new tools, code etc. For example, the significant role of big data today will only create jobs for statisticians, data analysts etc.

This gets us to our final argument

Argument 3: There are certain jobs only human can do

Let’s think logically. Can everything be done by machines?

Take an example of accounting software. It is not-too-far future where startups and SMBs can have access to financial advice without having to bear the cost of a full time employee (or CFO).

A lot of repetitive but time consuming jobs would be automated but does that mean you will not require the expertise of an accountant? It actually empowers them by providing them more time to give quality advice.

It is argued that many jobs require human characteristics like creativity, judgment, analysis, empathy, problem solving, innovating or critical thinking. Such jobs will never succumb to automation.

Dr. Pamela Rutledge, a Psychologist simplifies the conundrum and says  “An app can dial Mom's number and even send flowers, but an app can't do that most human of all things: emotionally connect with her”

In short, technology will keep moving forward but some jobs will only be done by humans. Doctors, therapist, hairdressers, PR managers etc fall into this category.

An analysis of the British workforce by Deloitte, highlights a huge shift to “caring” jobs over the past two decades. There has been a 909% increase in nursing assistants, 580% in teaching assistants and 168% in care workers.

Analysis of the UK Labor Force Survey from the Office for National Statistics suggest that between 1992 and 2014 there was a:

On the other hand, there was a

Even if we believe that weavers, typist and company secretaries may lose their jobs, they will have opportunities in other careers paths like education, housing, caretaking etc.

Now we know that technology can change the nature of jobs, rather than replace it completely with machines or robots. Adopting automation technology and creating new jobs for all is just a matter of time. Over the last 15 years, occupations have evolved through a collaboration between the humans and machines; and it will continue to happen in the coming years.